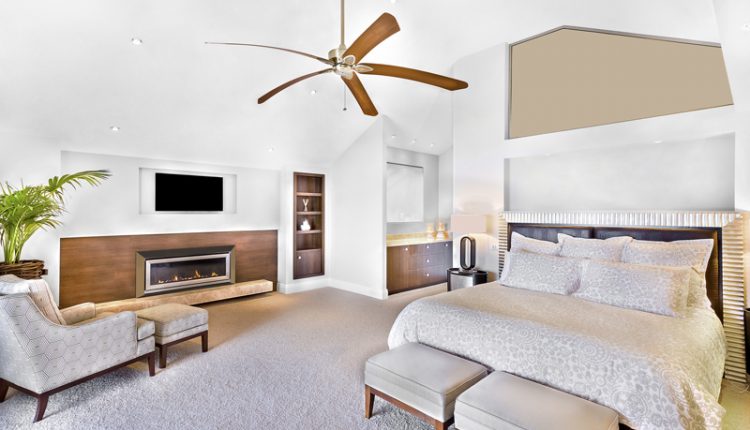 Why Choose a Ceiling Fan

Ceiling fans are both aesthetically pleasing and functional. Choosing a ceiling fan is also an affordable and energy reducing option.

Ceiling fans are a practical and decorative addition to any room. They can be used indoors and out for an attractive yet useful feature. Choosing the ideal ceiling fan is dependent on the type of use as well as your individual style and taste. They are available at decorating centers, home improvement stores and even department stores. They are also affordable and can help reduce energy costs. 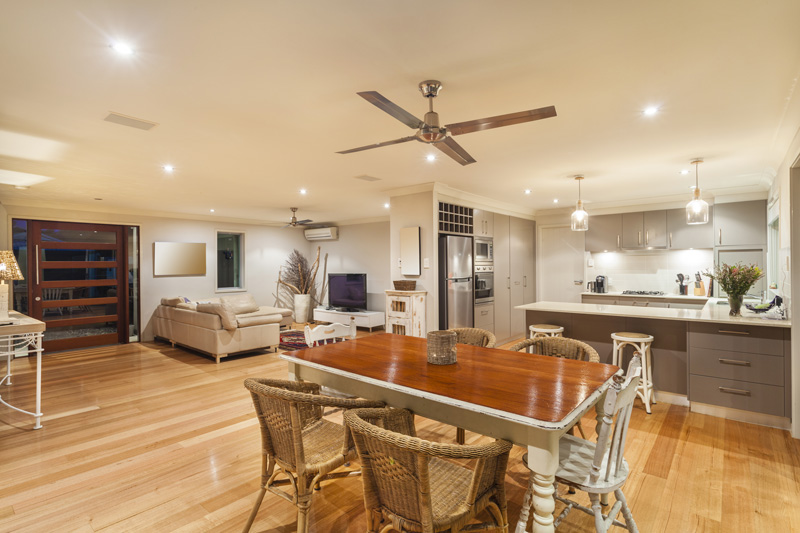 There are many ceiling fans available in a variety of styles and sizes to suit any décor and room. For a modern look, choose a sleek, monochromatic fan with three or four blades – the clean lines add a bit of elegance and dramatic flair to any room. Also, add a wooden fan in a solid color or steel bladed fan for the ultimate modern look. If you’re feeling a more traditional style, opt for a wooden fan with minimal ornamentation and with four or five blades. Victorian style fans often come in rich dark words with ornate decorations and gilding. For a child’s room, you might choose a themed fan such as a baseball fan or a fan depicting storybook characters. 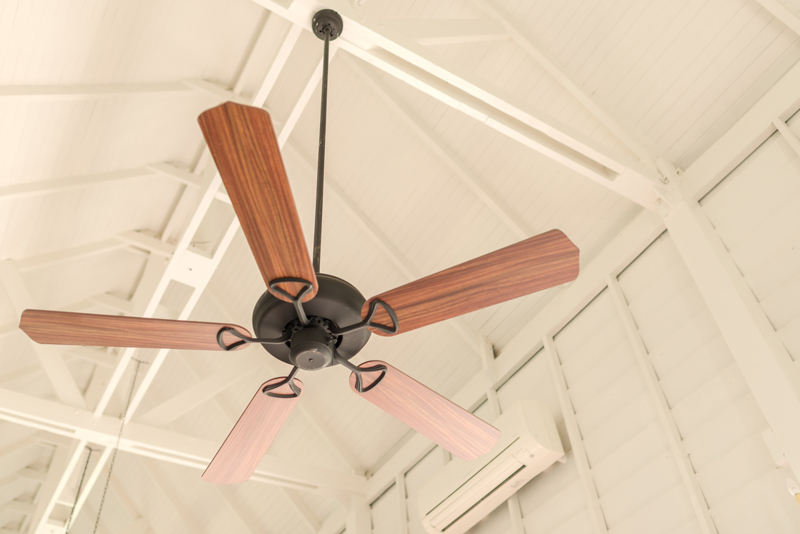 Most fans are suitable for use indoors but if using it on a patio or place open to the elements, it is important to choose one specifically suited for outdoor use. These fans are treated to withstand temperature variations, water and sun. Choose a fan that allows dual direction for use in warn and cold weather. Changing the direction of the blades will help heat or warm a room as necessary. Some people prefer the flexibility of having various speed capabilities – most fans will allow for at least two or three speeds, but there are fans available with only one set speed. Fans typically include lighting or the possibility to add light. Up lights will direct light toward the ceiling for a soft glow, adding romance and sophistication to a room. Almost all lights have the ability to add traditional lighting to help illuminate the room – choose a design that fits the fan style.

Ceiling fans should be eight to nine feet off the ground for optimum effectiveness. Lower ceilings can use a flush mount system, which places the fan tight against the ceiling. For higher ceilings, the use of a down rod is necessary. A down rod helps extend the space between where the fan should be and the ceiling. If your ceiling is sloped, use an angled mount to level your fan. When installing a fan it is important to turn off power to the room for safety. Follow the directions included to ensure everything is set up properly. Most modern homes are pre-wired and no electrical work will be necessary besides hooking it up. However, if this is not the case, some minor electrical work may be needed. If unsure, most home improvement centres will install it for you at a minimal charge.

Ceiling fans are a great addition to any home and can add to the decor of any style of room. From fun to elaborate, there is a variety of fan suitable for every style. Choose the fan that best suits your taste and provides the functionality desired. It can help reduce heating and cooling costs by re-circulating the air in a room, lessening the time needed for air conditioners and heaters to work. 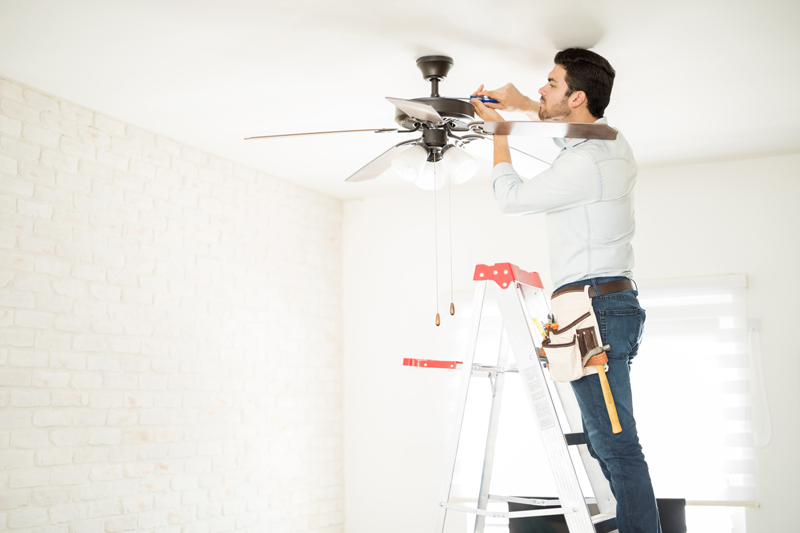 A ceiling fan is a great alternative to an air conditioner, it is more stylish and doesn’t make a lot of noise. A ceiling fan does not work like an air conditioner that actually lowers the ambient temperature of a room. Instead, a fan swirls the air, moving it from place to place and creates a wind effect. The passing air absorbs some of the heat from your body; as it moves away, it carries the excess heat with it. It has been estimated that when a ceiling fan circulates air, it can create an effect of a reduction of up to 3 degrees in body temperature.

The ceiling fan options start with the Casablanca ceiling fan that draws its inspiration from life, nature, and the environment. If you are looking for a new, quality ceiling fan then do not neglect to look at the wonderful line of ceiling fans that Casablanca has to offer. You will not regret the classical, yet innovative features. Another excellent option is the Hunter ceiling fan – it is one of the most respected fans in the industry. Hunter has been making fans for over 120 years. They create each fan with confidence, drawing from their long and prestigious history. In addition, they offer many different styles of ceiling fans that are appropriate for nearly any room or budget.

A History of Fans

The first artificial wind-chill methods as used by animals in nature was duplicated by royalty and wealthy people of early Assyria and Egypt, who employed servants waving large leaves to cool them down on hot days. Many centuries later, in 1882, Diehl introduced his invention of the electric ceiling fan – a device that was a bubble-blade adaptation of the well known belt driven fan with an in-built electric motor. By the end of the 1880s, the “Diehl Electric” was sweeping the country, and by the late 1920s, no self-respecting restaurant, drug store, ice cream shop, or elegant dining room, was without a ceiling fan as part of their decor and method of ventilation.

Although ceiling fans were widespread throughout the early 1900’s, they gave way to the air conditioning systems of today. A ceiling fan, however, is much more than an air movement machine – they’re aesthetically pleasing and can be ordered to fit perfectly into any decor or room of your home. 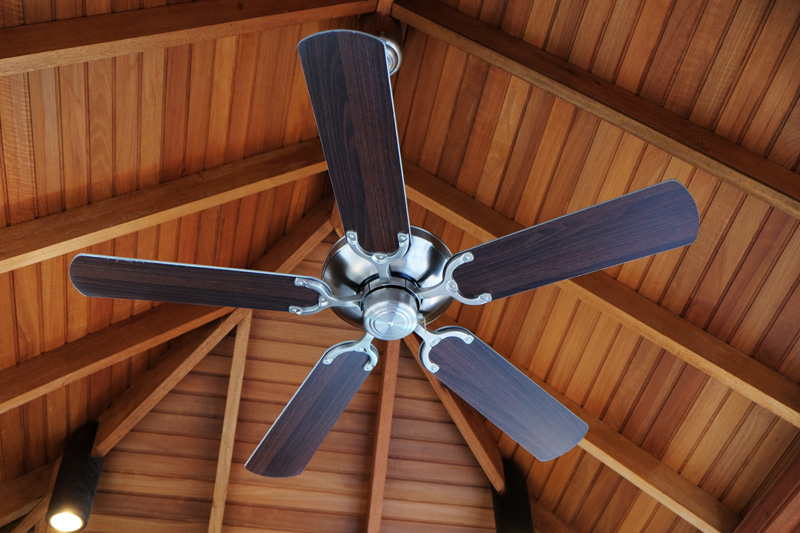 Ceiling fans can reduce cooling costs. In the summer, a breeze created by a good ceiling fan can make you feel between two and six degrees cooler. There are many ceiling fan designs and styles, and it is important that one considers the following options carefully before purchasing a ceiling fan.

It is important that the fan will fit in your room.  You must consider the height of the ceiling and be sure that the blades have ample space in which to spin. It is recommended that the blades are no closer than two feet from the nearest wall.

Good ceiling fans have a motor size and precision ground motor windings matched to the length of the blades. This motor ensures that the fan moves the air efficiently, even with continuous use, and uses less energy to run. If the motor or blades are improperly balanced, vibrations will occur, even at slow speed. Fans that are built for outdoor use have motors that are specially designed to withstand moisture and fluctuations in temperature.

Fan blades come in all sorts of wonderful shapes and patterns. However, it is important that the fan blades chosen will offer a balanced performance for a stable operation. They should be protected with a sealant to avoid the warping effects of moisture. Fan blade pitches range from 8 to 15 degrees – the higher the pitch, the more air the fan will circulate at slower speeds. The number of blades in a ceiling fan ranges from three to five, but this number has little effect on the amount of cool air the fan produces. 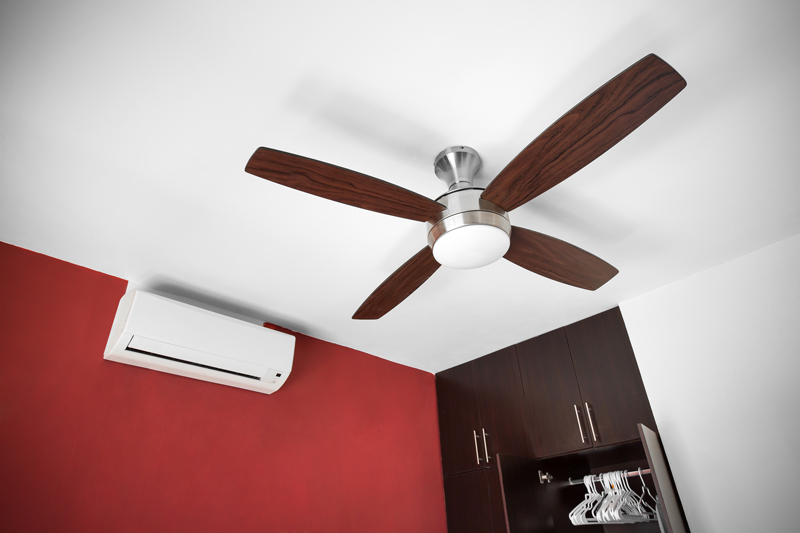 There are three main varieties of ceiling fan mounts – downrod mount, flush mount, and tri-mount. Fan downrods can come at any length and are specially designed for rooms with higher ceilings, bringing the circulating blades of the fan down into the living space where it is most effective. A flush mount is designed for rooms with lower ceilings, and eliminates the need for a downrod. A tri-mount allows one to install a fan in a room for the best circulation whether there is a low, high or angled ceiling.

Many people wrongly assume that a ceiling fan is only good in the summer. In actuality, most fans built today have a reverse switch installed. This switch allows the fan to either pull air from the floor area or push air from the ceiling. As a result, you would want air movement from low to high in the summer, but in winter, you would want the warmer air at the ceiling to be pushed down to warm the whole room. Ceiling fans are also great to use anywhere there’s people or living spaces including bedrooms, living and family rooms and even out on the backyard patio or deck.

In the end, a ceiling fan can be a great way to add a nice decorating touch to your home while saving big dollars on your monthly electric bill. It’s not unusual to save the price of the ceiling fan in the first month, just on the electric bill alone. With your home more open, natural ventilation will make it more pleasant and enjoyable both inside and out.

How to Properly Install a Radiant Heat System